Anuta, or Cherry Island is a small (0.4 square kilometres) volcanic-origin island in the extreme east of the Solomon Islands, the most eastern populated islands in the nation. Its position is approximately 169º 50' east and 11º 40' south, half-way between the Solomons and Tuvalu. Anuta's nearest populated neighbour is Tikopia, about 112 kilometres to the southwest, although an uninhabitable rock, known to Anutans as Patutaka-lies forty-eight kilometres to the southeast. The next closest islands are Vanikolo, Utupua, and the Reef Islands, with mixed Melanesian and Polynesian populations, and the Duff Islands, all over 320 kilometres away. Further southwest are the Banks and New Hebrides Groups. To the east, the nearest neighbours are Rotuma, 800 kilometres away, and then Uvea, Futuna and the Tongan and Samoan archipelagos. Tuvalu (Ellice Islands) lie between 960 and 110 kilometres to the northeast and the Fiji Islands are about the same distance to the south. These neighbours all have a bearing on the origins of Anuta's population. There is no sheltered anchorage, and ships must anchor off the reefs, their passengers going ashore in canoes.

Patrick Kirch's research suggests that Anuta was first colonised around 950 BC by a population possibly from Futuna in west Polynesia, which made Lapitoid plain pots. There was a severe cyclone, presumably more than two thousand years ago, which deposited a large sand dune on the settlement site, which led the population to abandon the island. Anuta had been recolonised by AD 580, this time by a population that did not use ceramics and had a limited number of artefacts. It is unclear if they were Polynesian drift voyagers or Melanesians. Later archaeological evidence shows the intrusion of still another group, who may have been the Polynesian ancestors of the present inhabitants. There is no evidence that sustained long-distance contacts were maintained with these colonising groups or with any of the surrounding islands other than Tikopia, and even the latter were only in the centuries immediately prior to the first European contacts. (Kirch 1984)

Anuta oral history suggests two periods of settlement. As summarised by anthropologist Richard Feinberg, the Anutans' version of their history is that long ago the demigod Motokitiki pulled their island from the floor of the ocean. Little is known of the inhabitants until the time of Pu Ariki, the founder of the Taumako lineage on Tikopia, who is said to have voyaged to uninhabited Anuta about fifteen generations ago. Two more canoes soon arrived, one led by Pu Kaurave, a Tongan who became the first chief of the modern population, and one from Uvea (thought to have come from East Uvea or Wallis Island) led by Pu Taupare, the ancestor of the present chiefly line on Uvea. Oral testimony suggests that Pu Kaurave voyaged from Anuta to Taumako (Duff Islands) or Vanikolo, but was killed in battle. His son, Ruokimata, who had been on the voyage, then returned to Anuta and took over as chief, but since he had no offspring the chiefly line was taken over by Toroaki of the Uvean line. This may have been in the sixteenth century. In these early years, canoe migrations also settled on Anuta from Tonga and Samoa, adding to the complexity of the genetic and cultural makeup of the people. Three generations after Toroaki, during the time of a chief named Tearakura, there was internecine warfare, which killed most of the males on the island, and the few survivors produced no male heirs. Anutan women were the only descendants of the Samoan and Tongan lines, and since titles were traced only through males the non-Uvean lines were wiped out. In the following generations arrivals from Rotuma were incorporated into Anuta's lineages, and regular relations with Tikopia continued, further mixing the origins of the Anuta population. (Feinberg 1981, 6-11)

The first recorded European sighting of Anuta was by the crew of HMS Pandora on 12 August 1791, under Captain Edward Edwards, on their way to search for the HMS Bounty mutineers. During the nineteenth century, whalers and labour recruiters visited Anuta periodically, and some Anutan males joined these vessels. In 1871, Captain Albert Markham of HMS Rosario landed on the island; records from this voyage provide the earliest written description of the people. They were recognisably Polynesian but had some non-Polynesian customs such as chewing betel and making large holes in their earlobes. Markham saw no women or children, but estimated the male population at around two hundred. The Anutans cultivated yams, taro, bananas and breadfruit, and were noted mat-makers. Other vessels from the British Admiralty visited Anuta in the 1870s while charting local waters. They recorded no presence of pigs or fowls.

Anuta was not incorporated into the British Solomon Islands Protectorate until 1899. The Anglican Diocese of Melanesia (q.v.) sent three Tikopian missionaries there in 1916. Protectorate reports on Anuta begin in 1935, and starting in the 1950s Protectorate officers from Kirakira or Graciosa Bay visited Anuta almost every year. 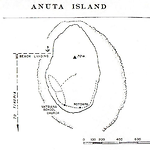 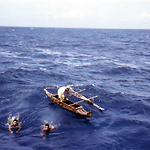