Betel nut is the seed of the Areca palm (Areca catechu) and is widely used in Africa, Asia and the Pacific as a mild stimulant. When ripe, the nut is brown or yellow in colour. It is not a true nut of the palm but rather a drupe, a fruit with an outer fibrous section surrounding the stone or nut.

Use is widespread in the Solomon Islands, usually combined with lime made from burnt shells or coral and pepper or piper leaves (Piper betle). The fibre is peeled off the nut and sections of the soft core mixed with lime, which is usually carried in a bamboo cylinder and accessed with a thin spatula. The fibre can also be used as a toothbrush. Chewing the mixture causes a mild hot sensation in the body and heightens alertness. The nut contains tannins known as arecatannin, gallic acid, a fixed oil gum, teroineol, lignin, some saline substances and three alkaloids: Arecoline, Arecaidine and Guvacine. Arecaidine has a nicotine-like effect and also acts on the parasympathetic nervous system. The visible effect is a reddening of the teeth and lips and the spitting of saliva. Users report a sense of euphoria, a feeling of wellbeing and a heightened capacity to work. The strength of the nut varies and beginner users may suffer dizziness, nausea and cold perspiration. Chewing the mixture, particularly when lime is added, increases the risk of damaging the gums and acquiring cancer of the mouth, pharynx, oesophagus and stomach. Betel nut plays a role in gift-giving ceremonies, such as betrothal and propitiatory offerings to spirits. (Burton-Bradley 1972; Oliver 1989, 304-308) 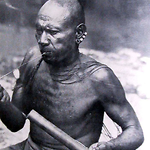