Body art in the form of tattoos and piercings is common. Scarification and cicatrice (raised tissue formed over scars) decoration were practiced but are now uncommon, except for shallow lines on faces. Tattoos are the most ornate and largest among the Polynesians. For instance, on Ontong Java, both sexes are tattooed in a blue-black colour, but women's tattoos are the largest, stretching from their waists to just above the knees. Their tattoos consist of a fine pattern, usually of a fish motif joined head-to-tail and encircling the whole body, with a series of lines one above the other. They extend across the buttocks and into the pubic area. (Woodford 1916, 33) On Rennell and Bellona, both men and women were also heavily tattooed, many of the patterns introduced from Tikopia several generations ago. The most common design was a broad vertical stripe and two similar oblique stripes, which look like an inverted arrowhead, and on either side there was a row of six or more fish figures. The chests and thighs and the arms were tattooed, and there were special designs for chiefs and their families.

In some areas, ears were pierced and the holes made quite pendulous, with large shell rings inserted. Nasal septum piercing was common among men, with wooden turtle shell and bone ornaments inserted. On Ontong Java, men wore an asanga, a turtle shell nose piece, and men and women on Malaita wore a similar ornamental nose-pendent called a farifari or komefari, or a nose pin called a usuusu or fio, both made from tridacna shell, and many other nose ornaments. Facial tattoos remain common among Solomon Islanders who were brought up in villages. (Woodford 1916, 34; Burt, Akin and Kwa'ioloa 2009, 31, 94) See also Material Culture: Forms of Wealth and Body Ornaments. 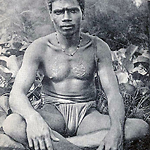