The Protectorate received a grant in 1954 to purchase cinema projector equipment together with generators for the district stations at Gizo, Kirakira and Honiara. The projectors were in operation by 1955. A commercial cinema was built at Point Cruz in the 1950s. K. H. Dalrymple-Hay's new cinema, the first in the Solomon Islands, was opened by the High Commissioner Sir Peter Stanley (q.v.) on 6 May 1955. The building had open sides, which allowed the heat from the crowded theatre to dissipate. A BSIP Censorship Board controlled the films shown, ensuring that they were not too violent.

Point Cruz Cinema operated until the early 1980s, screening 35 millimetre films in standard frame and in cinemascope. Feature films and a 35-millimetre edition of 'British News' from the Central Office of Information, London, were shown regularly. The major government training institutions and district administration headquarters had 16 millimetre projects. A film library was maintained by the Protectorate Education Department, from which churches and other institutions borrowed. (PIM Aug. 1955; NS 1 July 1955, 2 July 1955, 21 Mar. 1966, May 1966, 30 Sept. 1966; Montford 1994, 44-45; AR 1966, 67-68) 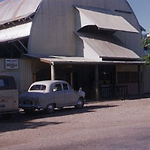