Guiding has been a major influence on education for girls and women. The inaugural meeting was held in May 1958, when the first Honiara Company numbered sixteen. Lady Gutch was the first President and Miss M. Pelham-Johnson was appointed as a Travelling Commissioner for Guides. The first Commissioner of Guides for the Solomon Islands was Elsie Mountford, wife of the rector of All Saints' Cathedral in Honiara. The first Annual Meeting of the Girl Guides Association was held in Honiara on 8 December 1959. In May 1961, Florence Tinoni, a teacher at Kohimarama School, west Guadalcanal, was the first Girl Guide to be awarded her Second Class Badge. In 1962, Girl Guide Companies were operating at Honiara and Bungana, with a Brownie Pack at Tasia. The Guide Headquarters building at Coronation Gardens, Honiara, was completed in 1963 and opened by Lady Trench on 9 September. In August 1965, Martha Kagea, of the First Bungana Guide Company, obtained the first Queen's Guide Certificate. 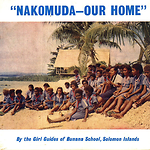