Honiara's first hotel was the Woodford Hotel in 1949, owned by Kenneth Houston Dalrymple Hay (q.v.), built using a former U.S. Army hut near the government offices. By 1950 it had been extended to include a residential wing of seventeen rooms. This became the Mendana Hotel. Redevelopment costing A$170,000 was announced in 1966, which added fifteen air-conditioned suite rooms, boosting the number of rooms to sixty-five, plus a billiard room, squash court, tennis court and swimming pool. The new Manager, Paul Brown, was also Manager of Guadalcanal Plains Ltd. In 1970, telephones were installed in all rooms and another extension programme started. A new company was formed, Mendana Hotels Ltd., owned equally by Guadalcanal Plains Ltd. and Naviti Investments Ltd. of Fiji. In 1972, the Solomon Islands Investment Company purchased the Guadalcanal Plains Ltd., half of the shares in Mendana Hotels Ltd., for $200,000. Plans were announced for another enlargement of the hotel with a new wing and new swimming pool. In 1978, the government acquired a 36 percent holding in the hotel. 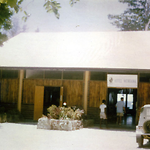