The Russell Islands consist of two main islands, Pavuvu and Mbanika, and several small islands about forty-eight kilometres northwest of Guadalcanal, and not far from southern Isabel Island. They are flat except for one small hill and well suited to plantation development. During the Protectorate years, the Russell Islands were always know as Cape Marsh (which is on Pavuvu) and were a major area of plantations run by Levers Brothers, the Fairymead Sugar Company (q.v.) and several smaller companies. They were administered as part of Central District and often came under the District Officer of Isabel Island. The main plantations were: Pipisala, Kaylan, West Bay, Somata, Faiami, Mbanika, Nasan, Nono, Loavie, Ufa, Lingatu, Yandina, Talina, Sephola, Nono and Nasan. (Bennett 1987, 155; Golden 1993, 390-391) Lever Brothers' Yandina plantation on Mbanka Island became the major port and eventually the site of a private airport. Americans occupied the islands during the Second World War. In the 1950s, a Polynesian resettlement from Tikopia (q.v.) began at Nukufero in the west of the largest island. 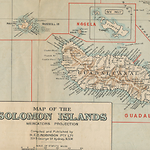 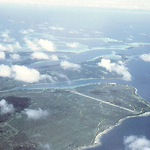