Savo Island lies midway between the northern tip of Guadalcanal and the Nggela Sule Islands, and is near both Tulagi and Honiara. It is small, round and also volcanic, becoming active approximately every one hundred to three hundred years. Because of its position it is the best known volcanic island in the Solomon Islands (q.v. Seismic Activity). Its elevation is 485 m (1,591 ft). Thermally heated streams descend from the central lava dome and megapodes abound, using the heated sand to incubate their eggs. The earliest written evidence of a Savo eruption was recorded by the Mendaña expedition in 1568. Using oral testimony, naturalist Henry B. Guppy in 1882 calculated that there was a long series of eruptions in the 1830s and 1840s. The most significant seems to have been in about 1847. The entire population perished during one eruption and another time only a few survived. Lava from one eruption extended the island on its northern side. Several times in the twentieth century the population has been ready to evacuate the island. The volcano is now quiescent but will erupt again at some time and is potentially dangerous.

Savo's language is part of the East Papua phylum found in Vella Lavella, Rendova, New Georgia and the Santa Cruz Islands. Residents have always traded with people of Guadalcanal, Malaita and the Nggela Islands, particularly trading pigs to Nggela and Malaita. They also raided the nearby Guadalcanal coast from the 1870s into the 1890s.

The Anglican Melanesian Mission established itself on Nggela during the 1870s and 1880s, but it took another thirty years to do so on Savo. Two Mota missionaries, John Ngongono and Andrew Lalenga, began a school there in 1870, and Mano Wadrokal (q.v.) established another for Isabel people living on the island in 1872. A Savo man trained at Norfolk Island started a school there in 1879. Between 1879 and 1881, David Ruddock spent several months on Savo. Progress for the mission was slow, however, and even in 1900 Savo people still rejected Christianity, and they influenced nearby Guadalcanal people against the Anglican Mission. The Catholics first attempted to settle on Savo in 1900, an outreach from their Visale station on Guadalcanal, and ran a mission there between 1909 and 1911.

Savo was not near the whaling grounds that attracted Europeans in the early nineteenth century. Once the Melanesian Mission was established in the neighbouring Nggela Islands in the 1870s, traders began to show interest in the area. European agents of Sydney traders Cowlishaw Brothers lived on Savo from the 1870s and 1880s. Joseph Emmanuel ('Portuguese Joe') was a prominent trader around Savo and Nggela from the 1880s to 1902, and trader Lars Nielsen was established on Savo and in the Nggela Islands. Neilsen traded for Alexander Ferguson on Savo Island from 1877-1880, and later on his own behalf, before setting up around 1888 at Gavutu. John (Jack) Cooper was a trader on Savo in the 1880s.

Once Resident Commissioner Woodford (q.v.) adopted Gavutu and then Tulagi as his base in 1896-1897, Savo was included in the expanded trading network. One side benefit was that bakua, a common scaly skin disease, was cured on Savo because of access to traders and the mixture of chrysophane and kerosene they sold. Savo Islanders also began to join the labour trade: 481 travelled to Queensland, a huge number from its small population, the majority in the 1880s, most of them men; and fourteen went to work in Fiji. (Price with Baker 1976; Siegel 1985) They also laboured within the Solomons during the twentieth century. Several copra plantations were established on Savo: James Risby and his sister Charlotte (Lottie) held ninety-four hectares at Birasu, Bitilamata, Kalaka, Boligaola and Songplego in the 1920s and 1930s. In the 1920s they employed a teenage Ernie Palmer, later a famous labour recruiter. Frank and Myrtle Keeble lived there in the 1930s. Savo was part of the Protectorate's Central District, and originally administered from Tulagi, but after the war Savo became part of the Central District, administered from Honiara. The island figured in many of the battles to control the central Solomon Islands during the Second World War (q.v.), particularly the Battle of Savo Island on 9 August 1942. In the 1930s, Savo's population was around seven hundred; the 1959 Census recorded 1,073 residents; a decade later the 1970 Census found 1,352. (Bennett 1987, 49, 50, 55, 92, 98, 117, 242, 244, 252-253, 261; Golden 1993, 22, 25, 72, 103, 127-128, 176-177, 186 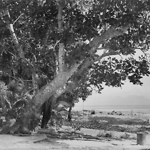 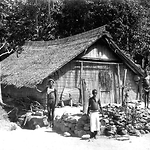 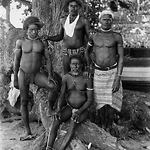 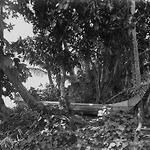 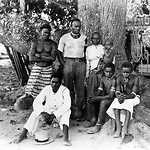 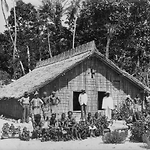