Sikaiana Atoll, or Stewart Island, is 555 kilometres from Ontong Java Atoll (q.v.). The lagoon is 16.09 by 8.05 kilometres in size and has no passage suitable for ships or even small boats. Sikaiana and neighbouring Ontong Java were first settled at the time of the southward migration of the Austronesians who eventually became the Polynesians, about three thousand years ago. The people were used to changes brought by outsiders-particularly by Samoans, Tongans and Gilbertese-through drift and deliberate voyagers from Micronesia and out of southern Polynesia. There was continual movement between the Polynesian outliers (q.v.) and the large Polynesian islands to the south; for instance, in 1906 Rev. George Brown visited Sikaiana and found one man who had lived some years in Samoa and spoke the language fairly well, another who had lived in Tonga, and yet another who had lived in the Fiji Group. (Brown 1907, 7) Sikaiana also has connections with Lau Lagoon in northeast Malaita, where one of the founding clans is from the Atoll group. Sikaiana and Ontong Java interacted regularly with the other Polynesian outlier atolls to the north: the Tasman (Nukumanu) Islands (q.v.), just fifty-three kilometres north of Ontong Java but just within modern Papua New Guinea, and the Carteret (Kilinailau or Tulun) Atoll north of Buka Island, and the Mortlocks (209 kilometres northwest of Ontong Java), all well within Papua New Guinea waters. These atolls all carried populations of a few hundred, which fluctuated with famines or introductions of diseases. Andrew Cheyne, who spent several months there in 1847, estimated the population at 171-forty-eight men, seventy-three women and fifty children-which is probably a little low and an indication of the effect of disease brought by whalers. (Shineberg 1971, 16; Woodford 1906, 41)

The first person from Sikaiana to come into contact with Europeans was probably Luka, later known as Pedro, who had been visiting Taumako in the Duff Group when he was among four men kidnapped to act as interpreters by the Spanish explorer Quiros in 1606: three jumped overboard near Tikopia and swam ashore, but Luka stayed and was taken back to Mexico. Quiros recorded his island as 'Chicayanna', a low coral island about four days sail from Taumako. Luka's descriptions of Sikaiana tattooing practices and a record of words he used leave little doubt of his origins. He also recorded that a large double canoe with about 110 people aboard had arrived at Sikaiana from an island he called Guavtopo, presumably late in the sixteenth century. (Woodford 1916, 39)

In 1791, British Captain John Hunter, second in command of New South Wales, travelling on the Dutch ship Waaksambeyd, sighted Sikaiana and named Ontong Java as Lord Howe Island. Sikaiana became one of the favourite calling places for whalers early in the nineteenth century. The first recorded visit was in 1828 when the John Bull brought a Sikaiana castaway home from Ontong Java, and bêche-de-mer was collected there in 1845 and 1847.

Soon after, long-distance shipping began passing near the Ontong Java and Sikaiana atoll groups on the outer passage from Sydney to Asia, traffic that continued until the inner routes close in to New Guinea or through Torres Strait became safe to use in the 1870s. In the 1860s, crew from Sikaiana joined the Stephania, travelling to Japan and onto the Bearing Strait to hunt polar bears, and returned via Hawai'i, Micronesia and Sydney. (Prendeville 1987, 6; C. M. Woodford, 'An Account of Sikaiana or Stewart' s Islands', C. M. Woodford Papers, reel 4, bundle 23, 3/27/1, PMB 1290, in PAMBU) Whalers combing the Pacific for their prey ventured to the isolated atolls off Bougainville and the Solomon Islands. Bennett's research into whaling logs found fifteen contacts with Sikaiana between 1828 and 1874. A variety of castaways lived on the island, some for a number of years. Adventurers like Ben Boyd also visited, on his luxury yacht Wanderer in 1851 (and claimed to have purchased the atoll group). The Austrian frigate Novara visited in October 1858, reporting the presence of a European castaway named Davis and recorded that there were then five atolls: Sikaiana, Faole, Matuiloto, Matuavi and Barena. The latter washed away later in the nineteenth century. (Bennett 1987, 27; Woodford 1916, 41; Diamond 1988, 195)

Another Davis, the captain of an American whaler in the 1860s or 1870s, delivered to Sikaiana about forty-three Gilbert Islanders from Kuria (Woodes). They had been driven from their atoll by fighting and he found their canoes far out at sea. The next year a few from this rescued group moved on to Nauru. With the arrival of the Kuria people, joined two years later by two consumptive sailors, the population balance on Sikaiana changed considerably and bgan to decline. (Woodford 1906, 165)

Sikaiana men soon began to join whaling ships as crew and travelled within the islands and to foreign ports. Whalers also changed the nature of the population when they introduced new diseases such as tuberculosis and smallpox. Sikaiana and Ontong Java have always hosted castaways from the Gilbert Islands and Nauru, which made them adaptable to change. Oral traditions collected by Protectorate officers said that whalers used one of the Sikaiana Atolls, Matuavi, as a depot to boil down blubber. This was a rare case of shore-based processing, which would only have been attempted if the local people were cooperative. Whalers also taught the people to make toddy, an alcoholic drink distilled from coconut palm blossoms, which they subsequently sold to passing ships. In 1847, Cheyne recorded that most Sikaianas spoke broken English and tobacco was much in demand. Ten years later they were using firearms, and could play drafts and cards. Their isolated atolls were changing fast. (Bennett 1987, 27, 39-40, 42, 43; Shineberg 1971)

Ontong Java was claimed as part of German New Guinea (q.v.) in 1893, while neighbouring Sikaiana was not. Soon after Resident Commissioner Woodford arrived in the Protectorate, in June 1897, HMS Wallaroo visited Rennell and Bellona, and Sikaiana Atoll. Captain G. N. Pollard proclaimed them to be under British protection. In 1906, Woodford recorded the entire population at about 250 people. Semalu was then the chief, and Woodford recorded the names of the previous nineteen chiefs before him. He was told that there had been Tongan and Samoan invasions about three hundred years earlier. (Woodford 1906, 168, 1916, 42)

Early in the twentieth century Sikaiana became too crowded: the sustainable population being between 200 and 250 people. The Melanesian Mission sent missionaries there in 1929 who brought about rapid conversion over the next ten years. They also persuaded some families to move to Isabel Island, but the experiment failed and they returned home. Since the 1940s there has been migration to Honiara, although connections with home have been maintained. (Donner 1992; Horton 1965, 149-150) 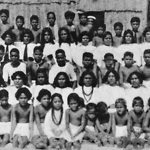