Born in 1926, Princess Elizabeth Alexandra Mary became Queen of Great Britain and Northern Ireland in 1952, and has been Head of State of the Independent Nation of the Solomon Islands since its inception on 7 July 1978. Her title is 'By the Grace of God Queen of Solomon Islands and of Her other Realms and Territories, Head of the Commonwealth', and she is represented in the country by her Governor-General (q.v.). Her Majesty visited the Solomon Islands in 1974 on the royal yacht Britannia, accompanied by the Duke of Edinburgh (q.v.), Princess Anne, Captain Mark Phillips and Lord Louis Mountbatten. The Britannia arrived on the afternoon of Monday, 18 February, and the Queen first landed at Star Harbour on the east coast of Makira. The greeting, as was repeated at each place visited, was a blend of custom ceremonies, traditional singing and dancing. It was raining on Makira, and conditions were similar the next day when the Queen disembarked in Honiara to inspect a guard of honour and visit the Cenotaph. Two programmes were planned, one for wet and one for dry weather, but the dry weather programme remained in place despite the weather, and the royal party moved on to the waterlogged sports ground in torrential rain. Thereafter dry weather continued for the rest of the day. The next day, the royal party flew to Malaita, landing at Auki to watch an impressive display of traditional dancing. The royal party then flew on to Yandina in the Russell Islands where the Britannia was waiting, and after a brief tour of a copra plantation and a research station the party embarked for a cruise to Gizo, where the next day similar custom ceremonies brought the royal visit to a close. (AR 1974, 7-8; NS 1 Mar. 1974) 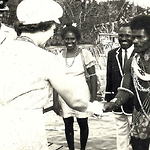