Jean-Baptiste Epalle was born in Marlhes, France on 8 March 1808. He was with the Marist Order, and was consecrated in 1844 as Vicar Apostolic of Melanesia and Micronesia. He arranged for travel on the schooner Marian Watson and sailed from Sydney in company with seven priests and six lay brothers and a boat packed with supplies to prepare for a mission settlement. They stopped at New Caledonia for a week and then moved on to Makira where they were met on the third day by a group of four hundred people in a hundred canoes. Epalle wanted to explore Isabel before deciding on whether or not to settle on Makira, and so the party left for Astrolabe Bay within Thousand Ships Bay on Isabel Island, where they anchored on 12 December 1845. The local people engaged them in trade, particularly seeking iron hatchets, and after three days of bartering aboard the ship Epalle decided to land. They were met by a large group of Maunga people headed by Londo, whose request for the Bishop's episcopal ring was politely refused. At this, part of the group surrounded Bishop Epalle and one struck him from behind with a hatchet. He was rescued but was severely injured and near death. The ring and most of his clothes had been removed. The Marion Watson's Captain Richards wanted to launch a punitive expedition but the Catholic party convinced him to desist. Bishop Epalle died at 4:00 p.m. on Friday, 19 December, and was buried at sea early the next morning. The missionaries decided to return to Makira, where they remained for twenty months, but one of them died from fever and dysentery and another two were killed. The survivors decide to close the mission, and left. (Wiltgen 1981, 330-346; O'Brien 1995, 47-58) 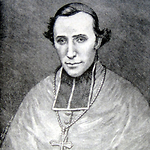