Robert Christopher Stafford Stanley had served in Africa and, directly previously, as Chief Secretary of Northern Rhodesia, before joining the Western Pacific High Commission. He was the first High Commissioner to hold the position in its own right, separately from the Governorship of Fiji. He was appointed in January 1952, arrived in Suva in June, and carried out an extensive tour of the WPHC territories in September. On 22 December 1953 he established the new headquarters in Honiara, and moved there with the majority of his staff. The Headquarters of the WPHC officially took over the direct administration of the Protectorate in 1 January 1953. Stanley retired as High Commissioner in July 1955. He was awarded the K.B.E., C.M.G., and O.B.E. Sir Robert was succeeded by Sir John Gutch (q.v.). (NS 12 July 1955; AR 1951-1952, 3) 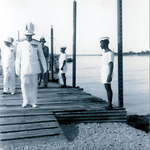