Jacob (Sale) Vouza was born on Guadalcanal in about 1900. He joined the Armed Native Constabulary in 1916 and retired in 1939 as a Sergeant-Major, having been in charge of the Armed Constabulary on Malaita since 1931. He was awarded the King George VI Coronation Medal in 1938, and the Colonial Police and Fire Brigades Medal to mark the end of his career. When the Second World War reached the Solomon Islands, Vouza enlisted in the Solomon Islands Defence Force and led scout patrols on Guadalcanal. When the Japanese captured him they brutally bayoneted him and inflicted wounds to his face, neck and chest, but he refused to give them any information. Left for dead, tied to a tree, he escaped his bonds and made his way to the American lines. Although nursed back to health by the Americans, his voice never fully recovered from the ordeal.

After the war, Vouza settled down in his village of Roroni, a few kilometres from Tetere on the Guadalcanal coast. He became a District Headman on Guadalcanal, President of the Guadalcanal Native Council and a member of the Advisory Council (q.v.). Colin Allan (q.v.) recorded that Vouza could not read or write and was having trouble in the 1950s remembering all of the details for the many public affairs in which he was involved. (Allan 1989, pt. 1, 80) Vouza was awarded a George Medal in 1943, a United States Legion of Merit and the Silver Star for Gallantry, an M.B.E. in 1957 and finally a knighthood. After the war, he was commissioned as an Honorary Sub-Inspector of the BSIP Police Force, and in 1953 he represented the Protectorate at the coronation of Queen Elizabeth II. Strangely, he was given as a souvenir the chair on which he sat and had it in his house. He served on the Advisory Council (q.v.) from 1951 to 1960.

In August 1968, Vouza visited the United States as a guest of the 1st Marines Division Association. He visited California, Philadelphia and Washington, D.C. where he met the Secretary of State. On his return, a large feast was organised to proclaim him as malaghai (warrior). The Marines erected a bronze plaque in front of his home in his village, now named 'California', in May 1974. During celebrations of the fiftieth anniversary of the Marine Landing, in 1992, a statue of Vouza was erected outside Police headquarters at Rove. He is the only Solomon Islander ever to be honoured in this way. Knighted in 1979, he died on 5 March 1984. Vouza was the public face of the Solomon Islands over many decades. He was regarded as the primary war hero in the nation and constantly was called upon to honour the war dead in public ceremonies. In the process of his 'creation' as a national hero there has been a degree of sanitization of Vouza's personal history. He could by fiery and contentious, and was very much 'his own man'. He was intensely anti-colonial at times, and was for a period the key leader of Maasina Rule (q.v.) on Guadalcanal. (PIM Nov. 1955; NS 9, 1 Dec. 1956, 1, 22 Jan. 1957, 31 Aug. 1968, 10 May 1974; Allan 1989, pt. 1, 81; BSIP 27/VI/6, Malaita Annual Report, 1941; MacQuarrie 1946; David Akin, personal communication, 2012) 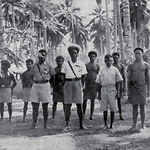 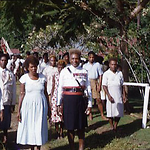 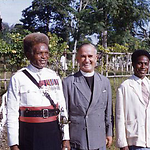 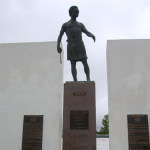