The government station for Malaita was established in September 1909, at Rarasu on the west coast at the top of Langalanga Lagoon. Early records sometimes called the station Kwaibala (or Quaibala) after the local river. The settlement became known as 'Auki', the name of a bird and of the island opposite in the lagoon. 'Aoke is a truer rendition of the pronunciation and though that was recommended in the BSIP Lands and Surveys Department 1968 guide to spelling, the Auki spelling is used throughout this work for the town (with 'Aoke retained as the proper for the island).

Government buildings were erected along with shelters for inland people coming down to the market. Initially, Auki consisted of little more than the few government buildings and Chinese trade stores. There were failed attempts to establish trade stores at Auki by Captain Swanson in 1915, by Leong Tong on behalf of Man Chong & Co. in 1917, and by Kwong Ching and Co. in 1920. However, there were two small trade stores on nearby 'Aoke Island in 1912 run by Tom Komburu (for Mr R. Laycock), and Johnny (for Mr S. Atkinson). (BSIP 14/40, 45) There were no Chinese trade stores at Auki station until the 1930s.

During the Second World War, the High Commissioner evacuated the Tulagi administration first to Auki and then to Fulisango in the hills behind Auki. The only incursions by the Japanese were in July 1942 when soldiers landed at Afuafu, moving on foot to Fauabu Hospital and Auki station. American pilots accidentally bombed the island of Laulasi in nearby Langalanga Lagoon, killing as many as thirty people. (Kenilorea 2008, 24-25) In 1948, the first government primary school, Auki Experimental School (q.v.), was established there, and in 1952 the Protectorate opened its first full-scale government school at nearby Aligegeo, later named King George VI School (q.v.). That year too, the Malaita District Council (q.v.) began, which brought more of an indigenous focus to Auki.

Auki's commercial environment began to change in the late 1950s. A. J. & G. Blum Ltd. began constructing a building to house a general store, bakery and movie cinema early in 1959. The cinema, with seating for 450, first screened on 28 August 1959 and continued to show films four days a week using a 35 millimetre projector. Previously, the only screenings at Auki had been with the government's 16 millimetre projector, showing news, documentary and cartoon films. The cinema did not prove very profitable. (NS Dec. 1958, Aug. 1959; AR 1959-1960, 44)

Auki Recreation Club opened a nine-hole golf course in May 1961. (NS May 1961) Auki Football Club's first games were played on 7 May 1966, watched by a crowd of four hundred at the GPS Playing Field, with District Commissioner Richard Turpin doing the kick-off honours. There were eight teams in the League and Rarasu Field was being prepared at Auki. (NS 21 May 1966) Auki Lodge opened in August 1972, run by Sri Lankan couple Mr and Mrs Abdul Fassy. There were six double en-suite rooms and a restaurant and bar. The Fassys had already been in Auki for six years, first running a general store, then a bakery, the Solair Agency, and a branch store at Malu'u. (NS 16 Aug. 1972)

As independence approached, Auki was a bustling port town with a main street of shops, the Golden Dragon bar for the rougher drinkers and Auki Lodge for the more refined. It was the terminus for the longest road system in the Solomons, the northern Lau and Atori head roads. The Anglican and Catholic bishops also lived in town. 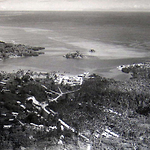 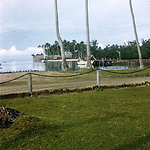 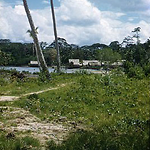 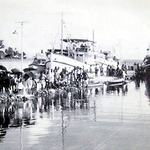 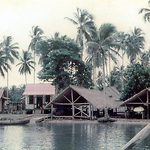 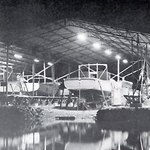 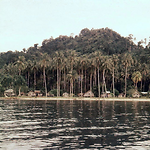