In 1954, plans were drawn up and a site selected near Honiara for a Teacher and Vocational Training College to train artisans, electrical and clerical workers, and teachers. The government's goal was to strengthen the training programmes that already existed through the various Christian missions. In 1955, the Protectorate received a £56,000 grant to establish the College, and High Commissioner Sir Robert Stanley laid the foundation stone at Kukum, Honiara on 22 June on the site of an American wartime defence position. The first staff housing was built in 1956 and the first students were welcomed early in that year. Completion of the main block was delayed until 1957 owing to the slow delivery of steel from the United Kingdom. (PIM Mar. 1956, Mar. 1957) The College was fully operational by 1959 when twenty students began training courses to teach in junior primary schools (Standards I-IV). Two-year courses for teachers, clerical workers and carpenters were planned, to be followed by others on metal work, electricity and radio operation as the College expanded. The first eighteen primary school Grade Three teachers graduated from a two-year course at the end of 1960, as did the first fourteen carpentry students. (AR 1959-1960, 4) In conjunction with the South Pacific Commission, two schemes for full-time technical education in printing and boatbuilding were introduced for Solomon Islands students and others from Pacific territories. A Literature Production Training Centre in Honiara began a one-year course in offset printing in 1960, with twelve students from six Pacific territories. The Auki boatbuilding course began in 1960. (AR 1959-1960, 38) In 1962, the third group to graduate included women. Also that year the second group of carpenters graduated, but there were no plans for a further intake. (NS Oct. 1960, 30 Nov. 1962)

By 1961, the government was investigating ways to increase the intake for the full two-year teacher training courses, and under the Australian Commonwealth Education Scheme short courses were provided to improve the teaching methods of unqualified teachers. (G. F. Bovey, Legislative Council, 6 June 1961, 68) Late in 1964, plans were formulated for construction of a 'Polytechnic', to provide facilities for a limited range of technical training, to coordinate common features of various training programmes and to provide adult education classes. (AR 1963-1964, 16)

Residential accommodation was expanded from forty-eight to ninety-six places in 1964 using a grant from the Nuffield Foundation. In 1966, Mr Carswell, Senior Assistant Director of the Department of Technical Education in New South Wales, Australia, completed the Carswell Report on the Development of Technical Education in the BSIP. It recommended that a technical college be developed at Honiara to provide basic and advanced pre-vocational courses on both full- and part-time bases. Entry was to be from primary Standard VII into a three-year course, beginning in 1970. (NS 12 July 1955, 16 Aug. 1963, 8 July 1966) In 1964, six female trainees were accepted, and Veronica Kafa and Sally Hakatuna from St. Mary's School Pamua became the first women to attend the College, graduating as Grade III teachers. (Pollard and Wairing 2010, 17; NS 14 Feb. 1964) Early students faced a danger unusual to academic settings: between 1959 and 1966 four hundred unexploded wartime shells were removed from the school grounds. (NS 21 Sept. 1966, 19 Dec. 1966)

In 1967, there were ninety-four teacher trainees, thirteen of them women. The school continued to provide two-year courses for teacher training. Selection was by competitive examination, and thirty-six new students enrolled in January 1967, including five women. In addition, ten of the eleven candidates trained at the Catholic Training College at Villa Maria, Visale sat for the BSITC examinations. (NS 21 Jan. 1967; AR 1967, 50) In 1970, the College increased its female intake from twelve to thirty, and the Scholarship Board agreed that teachers were eligible to apply for scholarships under the Commonwealth Bursary Scheme. T. Hitu from Sasamungga, Choiseul was the first recipient. (Pollard and Waring 2010, 18) During 1970, thirty-four Grade III teachers successfully completed their second year of training and forty-nine selected untrained teachers went through a crash course and were awarded certificates. (AR 1970, 52)

By 1974, there was a changeover in the Pre-Service Grade III Course length from two to three years. Curriculum development was improved and, in anticipation of substantial increases in the future output from the Grade III Course, seventy students began in 1975, and ten others trained in vocational subjects with an emphasis on home craft, rural science, arts and crafts and woodworking. In-service courses also operated during the school holidays, bringing in teachers from around the Protectorate. (AR 1974, 69) 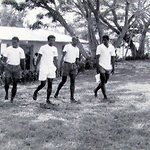 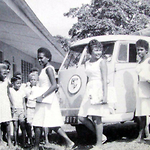