In the 2010s, 84 percent of Solomon Islanders still live in rural areas. Some 87 percent of land in the Solomon Islands is communally owned, 9 percent is owned by the state and 4 percent is under individual title. The basic economic unit is the family household, largely maintained by subsistence production of agricultural crops. Sweet potato (Ipomea batatas) and cassava are the main staple crops in most village gardens, supplemented by many varieties of yams, taro (Colocasia esculenta, and also Xanthosoma and Cyrtosperma), pana (Dioscorea spp.), bananas and sugarcanes, as well as betel nut and tobacco. Livestock consists of pigs and poultry, with cattle a recent introduction. Fish and shellfish are also important food items in most households. Barter was once commonplace, but more recently cash exchanges take place at weekly or bi-weekly markets in rural areas, and at daily markets in urban areas. There are no food shortages except when brought about by droughts and floods.

When C. M. Woodford, the first Resident Commissioner, arrived in 1896, the European export economy was based on pearl-shell and turtle shell, bêche-de-mer and a small amount of copra (q.v.). A considerable trade in whale oil (q.v.) had developed between the 1790s and the 1860s, which trailed over until the late 1880s, mainly in the north and central parts of the Solomons. Tobacco (q.v.) was the chief item of import, and was used as currency to pay for labour. The next most significant import items were small boats for European and indigenous use, and coal for Gavutu, where trader Lars Neilson kept a 1,000-ton supply for the British navy. (AR 1898-1899, 8-9)

The Solomons' colonial economy was founded first on wages remitted and brought back by men who worked as indentured labourers in Queensland, Fiji, Samoa and New Caledonia. The next source of money was smoke-dried copra production and, despite damage from cyclones in the early 1970s, at independence in 1978 copra still accounted for one-quarter of the new nation's export earnings. The Protectorate's early commercial economy was based overwhelmingly on the production and export of copra on plantations owned by individuals or large companies. In the late 1870s, the Germans in Samoa had introduced a hot-air method for the easy drying of copra for export, to replace the earlier laborious and costly processing of coconut oil. This industry began in the Protectorate in the 1900s, shaped by Woodford, who made deals with two large companies, Levers Pacific Plantations Ltd.(q.v.) in 1905, and the Queensland-based Malayta Company (q.v.) in 1909, to develop large-scale plantations. In 1913, there were twenty-three limited liability companies operating in the Solomon Islands, mostly in the copra industry, and mostly registered in Sydney and Brisbane. Some companies concentrated on transport and retail rather than plantations. Copra exports increased from 2,817 tons in 1903-1904 to 4,196 tons in 1912-1913. (AR 1913, 12) The stimulus to the copra industry ensured that in 1906 the Protectorate administration was financed by internal revenue and by 1910, for the first time, the BSIP had a small surplus in its budget. Solomon Islands copra was considered to be of poor quality and prices fell dramatically during the 1930s, following world trends. Many of the smaller planters lost their mortgages to large companies like W. R. Carpenter, Levers and Burns Philp (all q.v.). (Solomon Islands Planters' and Settler's Association, 1920-1923)

Immediately before World War II, the industry had been exporting around 22,000 tons of copra per annum. The coconut plantations were badly damaged during war and rehabilitation was slow, only fully accomplished in the late 1940s and early 1950s. During the war, coconut plantations also became heavily infected with weeds and otherwise suffered from neglect. Buildings and copra driers became derelict. After the war, British colonial policy changed away from demanding internal self-sufficiency for its colonies and Protectorates to providing external support for long-range development schemes, particularly in agriculture and industry. This was accomplished under the Colonial Development and Welfare Act, 1940 and 1945, an attempt to draw colonial peoples toward self-government through practical experiences, without subjecting indigenous societies to the dangers inherent in sudden dislocation of traditional ways.

The main postwar economic task was rehabilitation of the copra industry. From war's end until 1947 only 700 tons of copra was made. In 1948, the figure rose to 4,450 tons, in 1949 to 8,500 tons and in 1950 to 10,000 tons. Copra exports kept pace with this increase. In 1950, forty thousand acres of coconut palms were being worked, though twenty-four thousand acres still sat idle. All copra produced in the Protectorate was under agreement to be sold to the Ministry of Food in the United Kingdom through the Copra Board. Only Levers Pacific Plantations Pty. Ltd. held a private export licence, and even its copra was shipped under direction of the Copra Board.

There were few opportunities for indigenous business (q.v.) and most Solomon Islanders only participated in the economy as labourers (q.v.). However, some of the prewar plantations were worked by standing labour forces, and some by indigenous contractors at a fixed production price per ton. Such arrangements began due to labour shortages but continued because they were mutually profitable. Also, Solomon Islanders began to plant their own coconut palm groves. By 1950, in the Western Solomons the bulk of the copra was produced by indigenous communities, often transported by Chinese traders. Chinese (q.v.) traders first settled in the Protectorate in the 1910s and spread out from Tulagi to the district towns, and Chinese-owned vessels circulated widely, purchasing copra and selling goods. The government continued to encourage villagers to plant coconut palms, and worked to improve the efficiency of copra driers and combat premature nut falls caused by the pest Ambypelta Cocophaga. By 1978, 60 percent of copra was being produced by indigenous smallholders.

To further diversify the economy, in the 1950s the government encouraged planting of cocoa (q.v.) trees on both European-controlled plantations and indigenous estates. Other attempts at economic diversification introduced chillies, oil palms, and small-herd cattle raising. Timber and to a much lesser extent trochus shell also contributed to the export economy. Growing rice was also encouraged, but for sale within the Protectorate. These commercial farming ventures were sometimes carried out by whole communities but more often by extended families. Formal co-operatives (q.v.) were not introduced until the 1950s, but long before that communities had opened stores and purchased copra buyer's licences. (AR 1949-1950, 20-22; Lever 1973)

The next most important industry at the beginning of the 1950s was timber (q.v.): 1,181,289 super feet of it, largely kauri pine, was exported in 1949 and about 1,500,000 the next year. It was all exported by the Vanikoro (sic.) Kauri Timber Company (q.v.) which at this stage was operated by its parent company, Kauri Timber Company at Vanikolo Island. The Protectorate also exported small quantities of trochus shell and ivory nuts.

The government was well aware of the danger of overwhelming dependence on the copra industry and so continued to experiment with new crops and livestock. This began at Ilu Farm (q.v.) on Guadalcanal Plains (q.v.) and then moved to Kukum, nearer to Honiara. In the early 1960s, with better communications, the expansion of government services, and a series of Development Plans (q.v.), confidence in the Protectorate's economic future grew. Maximum effort was applied to diversifying the economy. In partnership with the government, the Commonwealth Development Corporation began field trials of oil palms, rice, vegetables, soya beans, maize, sunflower, sorghum, sesame, poultry and cattle on the Guadalcanal Plains. (AR 1949-1959, 22-23) As well, three overseas timber companies commenced large-scale extraction of tropical hardwoods, forming the foundation of the modern industry. In December 1964, the Legislative Council approved a White Paper on Agriculture and Fisheries Policy that defined the government's broad aims and policies.

In the 1950s wet rice crops began to be grown commercially on the Guadalcanal Plains and Solomon Islanders in Makira, Malaita and Guadalcanal grew some hill rice, which they husked using small machines owned by Local Councils and village groups. (AR 1959-1960, 63) The Commonwealth Development Corporation with the government ran field trials of irrigated and dry rice, soya beans and oil palms, and made a detailed survey of the agricultural potential of three thousand acres of land.

Commercial wet rice growing was first introduced on the Guadalcanal Plains by an Australian company, Guadalcanal Plains Ltd. In December 1965, this company had eight hundred acres under cultivation and was successfully cropping dry rice, sorghum and soya bean. (AR, 1965, 4) In 1971, dry rice farming covered 2,600 acres and yielded 1,450 tons. Irrigated rice covered 220 acres with a yield of 330 tons of polished rice. Irrigated rice had the larger yield and was less prone to attack from the armyworm.

An American company, Mindoro International Corporation, took over the wet rice production on the Guadalcanal Plains, and then in 1975 sold out to Hawaiian Agronomics (International), a wholly owned subsidiary of Hawai'i-based multinational C. Brewer and Company Ltd. In 1978, 405 hectares were under cultivation; enough rice was produced to satisfy the domestic market and exports had begun. Brewers Solomons Agriculture Ltd. became a joint venture with 45 percent owned by the government, but later the operation collapsed.

Geological surveys (q.v.) began about 1950, with an emphasis on mapping the entire Protectorate. The result was that by the late 1950s it was possible to concentrate development efforts on promising economic areas, some of which attracted mining companies (q.v.) to assess prospects. (AR 1957-1958, 58)

Two large enterprises were established in the early 1970s as part of plans to make the Solomon Islands more economically self-sufficient. In 1971, Solomon Islands Plantation Ltd. (SIPL) (q.v.) was established on an initial 1,478 hectares of oil palms on the plains, between the Ngalimbiu and Metapona Rivers, which became known as CDC I (after the Commonwealth Development Corporation which began the operation). (Moore, 2004b, 73-74) By 1974, almost five thousand acres had been planted at Ngalimbiu and Tetere, with nursery plants available for a further 1,800 acres east of the Mbalisuna River in 1975. The mill became operational in 1976. (AR 1974, 43; Parsonson 1969)

Also in 1971, Taiyo Fisheries Co. was established as a joint venture between the Protectorate Government and Taiyo Gyogyo of Japan. The Memorandum of Understanding (MOU) permitted catcher boats and refrigeration ships to have priority rights for eighteen months (later reduced to fifteen) and to survey the fishery resources. The first cannery was established at Tulagi (Meltzoff and LiPuma 1986; AR 1971, 40), and in 1978 development began of Noro as a new cannery and port in Western Province. (SND 17 Feb. 1978) In 1978, the Solomon Islands Fishing Company was established, which provided money to small-scale local fishermen as far apart as Roviana, Marovo, Gizo, Malaita, Central and Eastern districts to help them get their catches to market in Honiara. Another key form of assistance it provided them was access to ice. (SND 27 Jan. 1978; Smith 2011, 59-70; Barclay and Yoshikazu; Barclay 2005, 2007)

The timber industry had also grown and timber was the Protectorate's second most valuable export. In 1971, the timber exports had increased by another 12.5 percent and log production topped 9 million cubic feet, worth almost $3.25 million, not far below copra's export value. (AR 1971, 4, 40; Bennett 2000)

By 1974, there were 21,048 cattle in the Protectorate and 2,300 were slaughtered for domestic consumption. The vast majority of the animals were on expatriate-owned plantations, with the largest herds in the Central District. Small holders were also growing tabasco, long red chillies and turmeric. (AR 1971, 4, 40, 44) 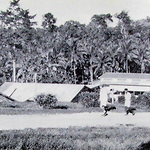 Title
The subsistence economy is still the main economy on the Solomon Islands and in rural areas markets like this are held to sell produce. The scene is from Fakanakafo Bay, east Malaita, 1976.
Type
Image
Date
1976
Source
Clive Moore 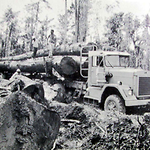