The nucleus of an Ethnology and Natural History Museum collection was formed in 1952 and a building to house the collection was erected in 1953. (AR 1953-1954, 45) The first stage of the modern Solomon Islands Museum was built in Coronation Gardens opposite the Mendana Hotel during 1968 using a grant from the Calouste Gulbenkian Foundation from Lisbon. The Museum's first collection was of artefacts on temporary display at British Solomon Islands Training College at Kukum. Rev. Charles Fox (q.v.) also offered his shell collection, reputed to be one of the finest in the Pacific. The Museum was opened on 6 June 1969 by Solomon Dakei (q.v.), Vice-Chairman of the Honiara City Council. The Honorary Curator was Lindsay Wall.

In 1972, the Museum was included in a new government department: Information, Broadcasting, Museum and Library Services. The Museum expanded in 1974 to include a Museum Shop, workroom, laboratory and offices, and a Museum Curator arrived funded by the United Kingdom Assistance Programme to help develop the Museum. A photographic record was assembled from museums around the world that hold photographs and artefacts from Solomon Islands. Local craftspeople could sell their products in the Museum Shop. A Museum Association was formed in February 1972 with Solomon Dakei (q.v.) as Chairman, Dr R. B. Thompson as Secretary, Sid Melville as Treasurer and an Executive Committee of Alphonse Daga, Peter Kenilorea (q.v.), James Tedder (q.v.), David Wellman and Bronwyn Hayward. In 1974, Anna Craven was Curator and Geoffrey Siapu (q.v.) was Education Officer. Lawrence Fo'anoata trained in Hawai'i in 1974 at the East-West Center's Cultural Learning Institute, and Henry Isa left for New Zealand in March 1975 to retrieve Solomon Islands artefacts from New Zealand museum collections. In December 1977, the Museum held the first Festival of Custom in the Museum gardens, with performances by two hundred singers and dancers. (NS 21 Apr. 1967, 21 May 1967, 17 Nov. 1967, 15 June 1969, 15 Feb. 1972, 31 Oct. 1972, 8 Nov. 1974; AR 1974, 12, 107; SND 14 Mar. 1975, 7 Jan. 1977; Tedder 1971) 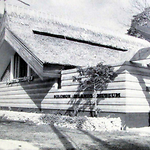