Leslie Boseto was born on 17 April 1933 at Boeboe, Choiseul, son of John Kukui and Unice Zero. He was educated at Sasamungga, Goldie College, Wesley College in New Zealand, the New Zealand Bible Training Institute, and Rarongo Theological College near Rabaul in Papua New Guinea. In 1958 he met Hazel, daughter of Cecil Pitavavini and Nellie Nanamana of Tabusaru Village, who had also been educated at Sasamuggu school. The same year he left for two years in New Zealand to attend the Bible Training Institute. He returned in 1960 to work as a catechist to Senga section. A lay teacher and pastoral worker from 1956 to 1966, he was ordained a minister on 15 May 1966, and then posted as minister of the Gizo Methodist Church. He married Hazel Pitavavini in 1961 before the couple left for Rarongo Theological College, where Leslie received his minister's training. Hazel, as marama, the minister's wife, became leader of the women on the circuit.

Boseto was appointed to succeed Rev. E. C. Leadley (q.v.) as Chairman of the Solomon Islands Methodist District in October 1968, after it was included in the United Church of Papua New Guinea and the Solomon Islands (q.v.). In late 1972, he became the first indigenous Moderator of the Assembly of the United Church of Papua New Guinea and the Solomon Islands. Boseto was elected President of the Pacific Churches Conference (1986-1991), and became the first Pacific Islander to be elected as one of the Presidents of the World Council of Churches (1991-1998). He was elected to the National Parliament on 6 August 1997 as the member for South Choiseul, and was re-elected in 2001 and 2006. He was Minister for Home and Cultural Affairs (1997-2000), Minister for Lands and Housing (2000) and Minister for Lands and Survey (2006-2007). Boseto became a long-serving member of the National Parliament and currently heads the Lauru Land Conference of Tribal Communities. Leslie Boseto is one of the foremost Pacific theologians. Historian John Garrett described him as 'the most prominent leader in the Western Solomons in the post-war period'. (Hogan 2002, 23) (NS 7 July 1967, 15 Dec. 1970; http://www.parliament.gov.sb/index.php?q=node/153 [accessed 1 Aug. 2011]; Carter 1973b; McDonald 2010; Voyce 1979; Zoleveke 1980; Lynne McDonald, personal communication, 20 Sept. 2011; Money 2002b, 20-24; Boseto 1983) 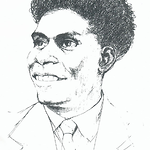