Salana Ga'a (full name Maega'asia) was born into the Areo descent group in the western Kwara'ae area, probably about 1916. He became the first formal leader of the entire island when he became President of the first Malaita District Council (q.v.). It is interesting to speculate on how his background led to his political role. Clearly, he benefited from his exposure to medical, law and order and administrative aspects of the Protectorate Government.

Malaita District Officer Val Andersen (q.v.) said that Ga'a told him that at twelve years of age he began working as a house boy for Gordon White, who was originally (1928-1932) with the Rockefeller Yaws and Hookworm eradication program and then BSIP Yaws and Hookworm Officer from 1932. He said that his employment by White lasted eight years, perhaps from 1928 to 1936. With White, he travelled through many areas of the Protectorate, even as far as Rennell and Bellona. He also told Andersen that he had been an orderly for Resident Commissioners Francis Noel Ashley (q.v.) (1929-1939) and William Sydney Marchant (q.v.) (1939-1943) at Tulagi and when Marchant evacuated to other places (1942-1943). He also claimed to have spent nineteen years as a member of the constabulary, rising to the rank of Corporal. During the Second World War, he served in the Solomon Island Defence Force on Guadalcanal, Nggela, New Georgia and the Treasury Group. He acted as a Scout and he certainly served time as senior orderly to Resident Commissioner Marchant from 1940 until the end of the war; possibly his employment at Government House did bridge back to Ashley. For him to have fit all of this into his life, he must have spent less than eight years with White, and also a shorter period with the Resident Commissioners.

His service at the Residency certainly went forward to Owen Cyril Noel's term in 1947. That was the year Salana Ga'a was charged with stealing Residency china and imprisoned. He returned to Malaita on his release and participated in Maasina Rule (q.v.). He became a Federal Council leader and in 1952 was elected as the first President of the Malaita Council, formally appointed in early 1953. He was re-elected in 1954. Ariel Sisili (q.v.) took the position for a term, then Ga'a won a third time in 1957. He was a member of the BSIP Advisory Council (q.v.) during 1953-1954 and in 1958-1959. Accompanied by Silas Sitai (q.v.), then an Administrative Assistant, he attended the 4th South Pacific Conference in Rabaul in May 1959. He was awarded a British Empire Medal. (NS April 1959; David Akin, personal communications, 26 Nov. 2009 and Sept. 2010; Lambert 1933; DC Malaita Val Andersen, confidential, 'Report of First Meeting of Malaita Council at Auki' on 6th and 7th November 1952, 14 Nov. 1952,' BSIP 12/I/10/II) 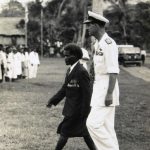