Silas Sitai, from Santa Ana, was educated at All Hallows' School (q.v.) and at Queen Victoria School in Fiji. In 1939, he was appointed to the government service as a clerk in the Resident Commissioner's office in Tulagi. In his spare time he learnt Morse code and when the war broke out he was in Suva training to be a wireless operator. He joined the Fiji Naval Reserve and returned to serve with the scouts on Guadalcanal as a non-commissioned officer of the BSIP Defence Force, attached to the U.S. Marines. After the war, he returned to Fiji to complete his studies. On his subsequent return to the Solomon Islands he was appointed as a clerk in the Eastern District, and by 1954 he had risen to be an Assistant Administrative Assistant. For a short period of that year he was in charge of Eastern District. In 1958 he was posted to Central District. In May 1959, he accompanied Salana Ga'a (q.v.), first President of the Malaita Council (q.v.), to the 4th South Pacific Conference in Rabaul. In February 1962 he was appointed as the Public Service Officer of the new Land Trust Board, and soon after departed for Britain for six months to tour rural and urban district councils to gain experience in administration. That August he became an Administrative Officer, Class B. In 1964 Sitai was appointed a District Officer in Central District (1964-1965), That July he attended the South Pacific Commission's regional Technical Meeting on Urban Local Government in Port Moresby, where he met with urban local government officers from across the Pacific Islands. In 1966, he was appointed as District Officer for Isabel Island.

In 1970, Sitai was returned as a member of the Governing Council. Initially the High Commissioner was the Chairman, with Sitai as Deputy Chairman, but from August 1971 Sitai was the Chairman, and he remained effectively the day-to-day Chairman until his death in October 1972, after which the High Commissioner resumed the position. Also in 1972 he was appointed to the Public Service Advisory Board, was Chairman of the Air Transport Licensing Board and served on numerous other statutory boards and committees. 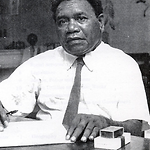