All Hallows' (senior primary) boys' boarding school was established at Pawa, Ugi Island on 9 June 1922 by the Diocese of Melanesia (q.v.) as a replacement for St. Barnabas' School on Norfolk Island. The land had previously been owned by the trader Joseph Dickinson. The school was started by Reginald Hodgson. Pawa was known as 'the Eton of the Pacific' since it was based on St. Barnabas' School's customs and rules and was the best school in the Protectorate. The school also used the Mota language. It produced many of the indigenous clergy who went on to localise the Dioceses of Melanesia. Its best-known Headmaster (1938-1953) was Alfred Hill (q.v.), a master mariner who eventually became Bishop of Melanesia.

All Hallows' location made it difficult for the school to compete with the government's new King George VI School (q.v.) at Auki, Malaita and later at Honiara. In 1970 Bishop John Chisholm closed Pawa (All Hallows') and Pamua (St. Michael's) and combined them with the new co-educational Selwyn College near Najilagu, east Guadalcanal. What was left of the All Hallows' School was operated as a Diocese of Melanesia primary school until it was handed over to the government in 1975 to become a provincial secondary school. (Fox 1958, 236-239; Terry Brown, personal communication, 26 July 2011) 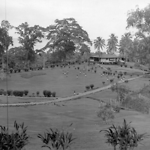 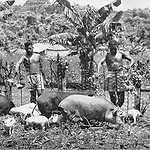 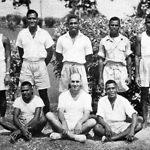 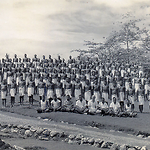 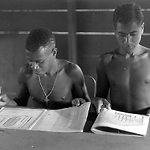