Walter Herbert Baddeley was the seventh Bishop of the Diocese of Melanesia (DOM). Born in March 1894 in Portslade, County Sussex, England, he was the son of Walter (a green grocer) and Agnes Baddeley. He was educated at Vardean School in Brighton and at Keble College at Oxford. The First World War interrupted his studies at Keble and he enlisted in the Royal Sussex Regiment, 8th Battalion. He then joined the Royal Survey Regiment, reaching the rank of Acting Lieutenant-Colonel and commanding a battalion. He received a D.S.O. and M.C. and Bar, and was four times mentioned in despatches. At the end of the war he joined the London regiment, and was demobilised from the Army at the age of twenty-five. He completed his B.A. in 1920 and also attended Cuddesdon Theological College where he was ordained a deacon in 1921, after which he served as curate and vicar (1921-1932) in Ripon and York, before becoming Proctor in Convocation for the Archdeaconry of Cleveland (1929-1932). Baddeley was consecrated as Bishop of Melanesia in 1932 and served until 1947. In 1935 he married Mary Katherine Thomas, daughter of the Bishop of Adelaide.

Baddeley was first approached by the English Committee of the Melanesian Mission to be Bishop Molyneux's (q.v.) Assistant Bishop in 1930, but declined. However, when Molyneux resigned in 1931 due to a sexual scandal, the English Committee recommended Baddeley to the Archbishops of Canterbury and the New Zealand Bishops to succeed Molyneux, expressing distrust of the local Mission staff's ability to recommend one of their own to the New Zealand Bishops for appointment. The cause of Molyneux's resignation and the details prompting it were known to the English Committee, the Archbishop of Canterbury, the New Zealand Bishops and Baddeley. Baddeley's war record, his successful ministry in York and his style of 'muscular Christianity' all commended themselves to replace the effete Molyneux. It is not clear if local Melanesian Mission staff were consulted about Baddeley's appointment. The New Zealand Bishops appointed Baddeley Bishop of Melanesia on 7 July 1932. He was consecrated Bishop in Auckland on 30 November and immediately travelled to Melanesia. An outsider with no experience of the Diocese, he was not sympathetic to many of the ideals of the Melanesian Mission, had no fluency in any local languages, never understood the consultation precedent established by Bishop Steward (q.v.) and never held a Synod. Baddeley's strength was in building up the Melanesian clergy and brothers, as well as schools and clinics. He encouraged the Melanesian Brotherhood (q.v.), which flourished, growing from twenty to 150 brothers, and he increased the Melanesian clergy numbers from twenty-eight to close to eighty. He also concentrated on building missionary work in New Britain. Concerned with the health of the people, he established a second Mission hospital at Lolowai, New Hebrides, and a third at Ugi, as well as clinics on other islands. Baddeley was equally supportive of better education, sending boys to Te Aute College in New Zealand, and to St. Francis' Theological College in Queensland. He developed thirty new 'district schools' in the islands, each staffed by graduates from All Hallows' School at Pawa (q.v.) on Ugi.

Baddeley had no large mission vessel for much of his episcopate. The Southern Cross VII (q.v.) was wrecked soon after he arrived and not replaced for some years, and then during the Second World War the Australian Navy chartered the replacement vessel. During the war he remained in the Protectorate, living at Tantalau in the Malaita mountains in the early months, before returning to his headquarters at Taroaniara on Nggela after the Americans arrived, and he was appointed Chaplain and Lieutenant-Colonel to the Fijian Battalion and the New Zealand Navy. His refusal to leave increased his mana, both with Solomon Islanders (for whom he became a symbol of British strength) and the Allied troops, particularly the Americans, who admired him. Baddeley was awarded an honorary doctorate from Columbia University in 1944 and the U.S. Medal of Freedom in 1945. Before and after the war he was a member of the BSIP Advisory Council (q.v.). After the war, he had to deal with the rise of Maasina Rule (q.v.), toward which he was antagonistic. Baddeley was also a Mason and founded the Masonic Lodge at Tulagi before the Second World War. 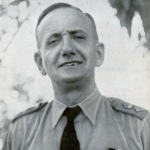 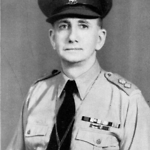 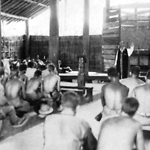