John Manwaring Steward was the fifth Bishop of Melanesia. Born in England in 1874, the son of Rev. Charles E. Steward and his wife Mary, Steward was educated at All Saints, Hampshire, at Magdalen College, Oxford where he earned a B.A. in 1896, and at Ely Theological College. After two years as a curate he joined the Melanesian Mission (q.v.) n 1902 and served on Guadalcanal (1902-1906), Nggela (1906-1911), and at Maravovo and the Theological College (1911-1919). Steward became Bishop of the Diocese of Melanesia in 1919, after Cecil Wood (q.v.) whom he had effectively removed by leading a vote of no-confidence against him. After a year's consideration by the clergy, who wanted an internal candidate, they nominated him and the Bishops of New Zealand accepted him. For the first time, the Melanesian clergy voted alongside their European counterparts. Steward was stout and burly of build, and ill adapted for trekking in the mountains of his island diocese, but he treated all as friends rather than staff or servants. Rev. Charles Fox (q.v.) described him as every inch a 'Prince Bishop'. Steward instituted the first Synod, which he believed should be confined to priests, and a staff conference for the lay workers, with the possibility of a joint meeting; both first met at Siota in October 1921. Steward also instituted two Advisory Councils, one in the Solomon Islands and one in the New Hebrides, which he consulted between the large meetings. The Synod also asked the General Synod of New Zealand to enact a canon to ensure that future Bishops could only be elected with the assent of the Missionary Diocese of Melanesia. Steward spoke three Melanesian languages, and was responsible for establishing the Ira Retatasiu, the Melanesian Brotherhood (q.v.) founded by Ini Kopuria (q.v.) as a Melanesian Missionary Order. He continued the use of Mota as the main teaching and communication language. He also proposed a pan-Pacific ecclesiastical province that would include New Guinea, Melanesia and Polynesia, but the idea was poorly received in New Zealand and Australia.

Steward also made two Assistant Bishops, Molyneux (q.v.) for the New Hebrides and E. N. Wilton for New Britain, the latter recently added to the diocese. During Steward's time, the first Cathedral for the diocese was built at Siota (q.v.), made from local materials and decorated with Solomon Islands art. The Diocese received two new ships, the large Southern Cross VI in 1931, which was used in the Solomon Islands, and the smaller Patteson for the New Hebrides. Steward often chose to travel by whaleboat and made one journey of eight hundred kilometres around the Solomons in one. Of his nine years as Bishop, he spent two in England due to his health, which was already in decline after his previous seventeen years as a priest in Melanesia. Steward was constantly criticised by the Melanesian Mission Finance Board in New Zealand for his high expenditures, supplemented by his private income. He retired in 1928 and died in England in 1937. (Bain BDACP; Fox 1958, 64-77; Hilliard 1978a, 301) 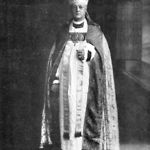