When John Manwaring Stewart (q.v.) became Bishop of the Diocese of Melanesia in 1919 one of his goals was to build a cathedral. The Mission headquarters on Norfolk Island had closed and been transferred to Siota on Nggela. Stewart erected a locally built Cathedral, St. Luke's, where the relics of Bishop Patteson were enshrined. The still incomplete building was dedicated on 27 May 1928. Each of its central pillars was given by a different congregation of the main islands, and the building was decorated with traditional-style art. It was badly damaged during the war and servicemen also took parts of the building as souvenirs. When the Protectorate headquarters were transferred from Tulagi to Honiara the Anglicans also shifted their headquarters there and the new All Saints' Cathedral (q.v.) was built, albeit as a temporary structure made from two Quonset huts placed together. It served the Honiara community until 1968 when St. Barnabas' Cathedral (q.v.) was built. (Fox 1958, 70; Godfrey 1928, 5) 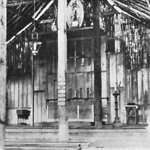 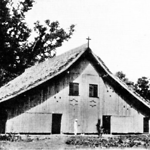