There have been three early Anglican cathedrals in the Solomon Islands. The first was St. Luke's Cathedral built at Siota, Nggela in the 1920s and destroyed during the Second World War. The second was All Saints' Cathedral (q.v.), a temporary structure on the site of the present Church of Melanesia headquarters in Honiara. The third was St. Barnabas' Cathedral, named after St. Barnabas' Chapel and School on Norfolk Island. Bishop Alfred Hill (q.v.) laid the foundation stone for the new Church of Melanesia cathedral in Honiara in 1961. Planning for the new cathedral continued over several years and the High Commissioner commenced the foundations on 6 January 1968. Some 1,500 people attended a dedication service on 15 December 1968. When the Cathedral was consecrated on 16 June 1969, dedicated by Bishops Chisholm (q.v.) and Alufurai (q.v.), over two thousand people attended the ceremony. The new Cathedral was 160 by 73 meters and could seat nine hundred people. It was constructed of a steel framework with an aluminium roof and a concrete floor in a modern design that nonetheless embraced Melanesian traditional interior decoration. A portion of the grounds were consecrated as a Cathedral Garth for the burial of those who served the diocese over a long period. The first internment was the body of the ninth Bishop, Alfred Thomas Hill, on 1 September 1969. St. Barnabas' Cathedral houses a casket containing the burial mat of Bishop Patteson (q.v.), the first Bishop of Melanesia, killed on Nukapu Island in the Reef Islands in 1871, as well as the baton and chalice given for his use in the Western Pacific. (NS June 1960, Feb. 1961; AR 1968, 82, AR 1969, 80-81) 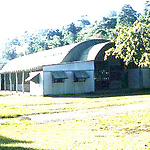 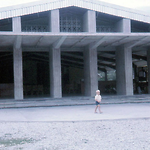