New residents in the Solomons often wonder when they see smart-looking, barefoot young men dressed in a white or blue sulu (wrap-around cloth), usually with a cross with pearl-shell inlay around their necks and walking about in pairs. They are the Tasiu, a local Anglican brotherhood who are believed to possess significant spiritual powers. On Sundays and saints' days professed brothers wear a white sulu, a white shirt and a black and white sash with a brotherhood medal. Novices formally wear a white sulu, white shirt and red sash with a shell 'medal' indicating their status. Informally (for walking about town, for example) novices wear a blue sulu, blue shirt, red sash and the 'medal'.

Ini Kopuria (q.v.) founded the Brotherhood in 1925, after he had a dream to preach the Gospel and reach people who had not accepted Christianity. Ini, from Maravovo, Guadalcanal went to school at St. Michael's School (q.v.) at Pamua on Makira and at St. Barnabas' School on Norfolk Island. The Brotherhood had its origins in early orders of monks, the short-lived St. Aidan's Brotherhood (1916-1920) which Rev. Charles Fox (q.v.) formed from ex-students from Norfolk Island, and the support the Melanesian Mission (q.v.) gave to indigenous proselytising. Brothers in the St. Aidan's prototype, led by Ellison Kojou from Maravovo, worked in pairs with non-Christian hill people on Makira, promising they would stay for two years without payment. Ini Kopuria had learned about the history of religious communities and was encouraged by Bishop John Manwaring Stewart to put his dream into practice.

The Brotherhood's headquarters is at Tabalia, thirty-seven kilometres west of Honiara, on family land given by Ini Kopuria to the Church for the brothers. Brothers in the Ira
Retatasiu promised to observe three basic vows-obedience, poverty and chastity-and worked in pairs in households of no more than twelve, headed by a Moenera (elder Brother), with the Bishop as Tuaga (Father). Early on they renewed their vows each year in front of the Bishop, but later this was extended to renewal every three years.

The Brotherhood was formed on 28 October 1925 with Ini as Head Brother along with seven initial members. All were former students of All Hallows' School at Pawa (q.v.) on Ugi Island, and they came from Isabel, Guadalcanal and Russell Islands. A start was made around Aola and at Marau Sound on Guadalcanal, and then in 1927 the Tasiu (as they are commonly called today) began a second household on Santa Cruz, moving on to north and central Malaita, Sikaiana and Ontong Java, and Tulagi. The Brotherhood expanded rapidly, from fifteen members in 1928 to 128 in 1935.

The concept worked because it provided an opportunity for former school friends to stay together and dedicate themselves to spreading Christianity for a few years before they re-entered village life and married. Often they had little education and came from recently converted areas. The Brothers eventually moved beyond the Protectorate, first to other areas of the Diocese such as Ambae and Pentecost in the New Hebrides (Vanuatu), then to New Britain (Papua New Guinea), and beyond to work with descendants of Solomon Islander indentured labourers living in Fiji. Their rules said that they could stay only three months in a village after beginning a school, and the Brothers often handed newly converted villages over to other faiths. Ini also formed the Order of Companions of the Brothers from groups of eight men and women who promised to help the Brothers through prayer and funding. This ensured that the Tasiu had a true indigenous base.

Ini Kopuria remained Head Brother until 1940, when he left, absolved from his life-long vow, and married, remaining as a village deacon in Guadalcanal until his death in 1945. He had always wanted the Brotherhood to extend beyond the Protectorate and the New Hebrides. The emphasis on converting non-Christians, Ini's departure, and the shortage of suitable novices lead to a decline in the Brotherhood during the 1940s and 1950s, by which time Christianity had become widespread. In the 1950s the emphasis was altered to Christian revival, and late in that decade the Brotherhood was extended to Papua New Guinea.

Some of the early European clergy thought of the Brothers more as an unpaid labour force for the Church, but this was never the attitude of Christian Melanesians. The Tasiu remain respected throughout Melanesia and their mana and healing power is regarded as strong by all faiths. During the political crisis of the late 1990s and 2000s the Brothers worked on the frontlines and several were killed in the turmoil that ensued. 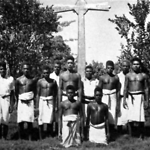 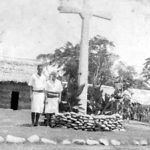 Title
Rev. Charles Fox and one of the Melanesian Brothers at their headquarters at Tabalia, Guadalcanal, c.1938
Type
Image
Date
c. 1938
Source
DOM 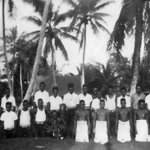 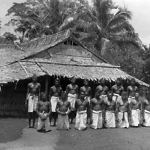