Derek Alec Rawcliffe was born in Manchester, where his father was a shopkeeper, on 8 July 1921. When he was four he moved to his mother's city of Gloucester, where he attended St. Thomas's School and Leeds University, before going to Mirfield College to complete theological studies. Drawn to Christianity, he attended the nearby monastic College of the Resurrection, became a deacon in 1944 and was ordained a priest the next year. He served at St. George's Parish at Claines in Worcester before joining the Diocese of Melanesia in 1947. Having read about the Melanesian Brotherhood (q.v.), he set off for Australia on the Oriana, then to Tulagi and finally, in December 1947, to All Hallows' School at Pawa (q.v.) on Ugi. The students, ages sixteen to twenty-two, were recruited from the Solomon Islands and the New Hebrides. The school was isolated, but taught all basic high school courses and encouraged extracurricular sports. Rawcliffe began the catechists' school there. He became Headmaster in 1953 and ran the school strictly. All students had to speak English whenever in the school compound, or face detention the next Saturday afternoon.

Rawcliffe then served as Headmaster at St. Mary's School at Maravovo (q.v.) (1956-1958) before he was transferred to Lolowai in the New Hebrides as an Archdeacon of Southern Melanesia. He was consecrated as an Assistant Bishop in 1974 at the Pro Cathedral at Lolowai, and in January 1975, when the Province of Melanesia was created, he was enthroned as Bishop of the New Hebrides, at the same time as Bishop Leonard Alufurai (q.v.) and Bishop Dudley Tuti (q.v.). During his time as Bishop the majority of the clergy were indigenous and he proved to be an effective leader. However, he was embroiled in some conflict with the Vanuatu independence movement in the late 1970s. He agreed with it in principle but was concerned lest the diocese be over-identified with the Vanuaaku Party led by Anglican priest (later Prime Minister) Walter Lini.

In 1977 he married Susan Speight, who had been a teacher of ballet and domestic science but was then confined to a wheelchair because of diabetic neuropathy. She died in 1989. In 1981, unexpectedly, he was appointed Bishop of Glasgow and Galloway. In 1995 he revealed his long-term homosexuality in the Gay Times and on television, the first Anglican Bishop to do so. At the time he was an Honorary Assistant Bishop in the Diocese of Ripon. The Bishop of Ripon ceased inviting him to perform Episcopal functions, although he was left free to minister as a priest. In his later years he published three books and four volumes of poetry and was active in Leeds in advocating for the welfare of asylum seekers. A gifted musician and linguist, he completed many translations from Mota and other languages in the Solomons and Vanuatu. He received an O.B.E. in 1971, and died in England on 1 February 2011. (Terry Brown, personal communications, 4 and 21 Feb. 2011; The Telegraph (U.K.), 13 Feb. 2011) 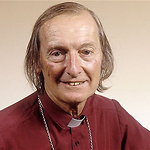