The new Constitution was officially instituted on 10 April 1970 by an Order of the Privy Council in London, which provided for a new Governing Council consisting of the High Commissioner, up to nine official members, and seventeen elected members, who for the first time outnumbered the official members. The new Governing Council was officially proclaimed after the 1970 election and replaced the Legislative Council (q.v.). The Governing Council met in public and private sessions of various committees. Representation was extended to areas of smaller population, such as Rennell and Bellona and Ontong Java (as Malaita Outer Islands). (NS 15 Apr. 1970)

The High Commissioner was obliged to consult with the Governing Council in the formation of policy and in the exercise of all powers conferred on him or of any other laws in force. However, he had complete discretionary power over defence, external affairs, internal security, the police, and appointment of the public service.

In August 1971, Silas Sitai (q.v.) replaced the High Commissioner as Chairman for all public meetings. The six public service members of the Council were gradually phased out and were finally withdrawn on 31 December 1971, leaving only three ex-officio and seventeen elected members. (AR 1971, 5) 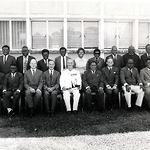