Peter Abu'ofa is regarded as the founder of the SSEC on Malaita. One of seven children of a family from Gwaiau village near Malu'u, Malaita, Abu'ofa enlisted to work on plantations at Bundaberg in Queensland, Australia, where he was baptised by the Queensland Kanaka Mission (QKM) (q.v.) on 28 August 1892. Two years later, in April, Abu'ofa and two other men, Try and Kobey, left Queensland on the William Manson to establish a mission school at Urasie in Lau Lagoon on Malaita. They faced fierce opposition from local bigman Kwaisulia (q.v.), after which William Voss, the recruiting ship's captain, forced Abu'ofa and his friends to re-enlist for another contract in Queensland. Abu'ofa sent a letter of complaint ahead of him with the Government Agent of another labour trade vessel and on reaching the colony, Abu'ofa brought charges against Vos and other members of the crew. The voluminous proceedings of the investigation and subsequent trials were published in the Brisbane Courier between 18 October 1894 when the ship returned to Brisbane, and 24 March 1895 when not guilty verdicts were brought down. Despite several irregularities, the jury decided that the evidence was not substantial enough to warrant convictions, although the Queensland Government banned the crew from further participation in the Queensland labour trade. The evidence includes substantial testimony from Peter Abu'ofa and Kobey, and many others on board, as the multiple charges were played out in two courts. Abu'ofa returned to Malaita again on the Para, which left Brisbane on 18 August 1895.

He and his colleagues were again received unwillingly by Kwaisulia for the second time and told to sleep underneath the houses with the pigs. Death threats followed, and Abu'ofa thought it wiser to accompany Lau canoes to the beach market at Malu'u on the north coast near the lands of his own descent group. He settled at Malu'u and for four years made little progress, suffering constant bouts of malaria and surviving several attempts on his life. Initially, he was forced to live on bush foods but finally his gardens flourished, at a time when there was drought all around, which impressed the people. He built a school on the pattern of the Queensland Kanaka Mission School at Kalkie, Bundaberg, where he had been baptised. He was joined by other Christian Malaitans and by European staff from the QKM, and finally his settlement became the major South Sea Evangelical Mission (SSEM) (q.v.) base in north Malaita. 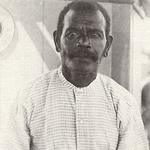 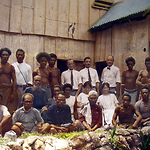