Born on 10 October 1856, at Motueka near Nelson in New Zealand, Florence Young was the fifth child of Henry Young, a farmer, and his wife Catherine Anne (née Eccles), both Plymouth Brethren from England. She was educated at home and at boarding school in England. At a prayer meeting in Dunedin when she was eighteen she felt the call of God and asked to be baptised.

Her parents died and she moved to Sydney, and then, in 1882, to her brothers' Fairymead (q.v.) sugar plantation outside Bundaberg, Queensland, Australia. She was steeped in the beliefs of the Plymouth Brethren and influenced by the English Keswick Convention, and she began the Young People's Scriptural Union, but increasingly her attention was drawn to the Islanders in the neighbourhood. In 1886 she founded the Queensland Kanaka Mission (QKM.) (q.v.) and with the help of members of the Young, Deck and Grant families she helped establish the mission and extended it to various centres along the southern Queensland coast. Young had early missionary experience between 1891 and 1900, including six traumatic years in China with the China Inland Mission. This helped her plan for her missionary work with Islanders who were prepared for Christianity and to establish Christian churches back in the islands. In January 1904, a Solomon Islands branch of the QKM was formed, which Young led to Malaita. She arrived at the Langalanga Lagoon on 8 April 1904, and then went to Malu'u to visit Peter Abu'ofa (q.v.). The QKM established its headquarters at Onepusu in west Malaita, changed its name to the South Sea Evangelical Mission (SSEM) (q.v.) in 1907 and spread widely on Malaita and to other Solomon Islands. Through annual visits to the islands, which she made until 1926, she dominated the expanding SSEM. She wrote a book about her missionary experiences titled Pearls from the Pacific (1925). Tall, confident, always well-groomed and somewhat inflexible in her beliefs, she died on 28 May 1940 in Sydney, having created a substantial church. (Young 1925; Hogbin 1939b; Tippett 1967; PIM 15 June 1940; Griffiths 1977) 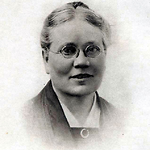