Walter Waaro was born in about 1858, the son of Houhou from Matoa on Ulawa Island. The Melanesian Mission had taken several boys and two girls from Ulawa to school in Auckland during the 1860s, but none of them were baptised and they had little impact back home. When Joseph Wate (q.v.) from Sa'a visited Ulawa in 1870, he was able to persuade Houhou, and Houhou's parents, to allow his twelve-year-old son to travel to Norfolk Island for education if Bishop Patteson (q.v.) came to collect him. Patteson did so and Waaro spent until 1872 at Norfolk, returning home for two years before going again until 1876. Back on Ulawa, he married Ahntora from Suholu on the other side of the island, and then took her with him to Norfolk. He also took her friend Tekuahu, who wanted to flee her husband and pretended to be engaged to Haarara, another student returning to the school. Waaro was a poor student: he spoke and wrote Mota badly and never wrote in his own language. By this time Waaro was about eighteen, and he was prepared for baptism, which occurred in 1878, sponsored by Clement Marau (q.v.). He received the name Walter and Ahatora was baptised Catherine. They married in a Christian ceremony on Easter of 1880 and soon after returned to Ulawa to found a school, accompanied by Clement Marau (q.v.) and Rev. Comins (q.v.)

Marau and Comins left Waaro in charge, and student numbers fluctuated between fifteen and thirty. In April 1881, a son was born and christened Clement, the first child baptism on Ulawa. Marau returned and gave Waaro the support he needed to continue, but after Waaro feuded with his jealous brother it was decided that he should establish a new school at Suholu. He struggled along without the support of local leaders for several years, except for one named Koliala who befriended him. Though earnest, he was a poor teacher and he suffered when Koliala died and the people demanded either death compensation or Waaro's life. Waaro's bravery convinced several adults to join the school, including the area's most important bigman, Maetea. Waaro was never healthy and often sick. By 1890, he was nursed by Clement Marau, with whom he went back to Norfolk Island to attend Marau's ordination as a deacon. Waaro died there in August 1891. (SCL 15 Oct. 1898, 6-9, 15 Dec. 1898, 3-5, 7) 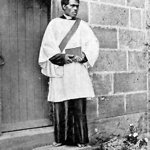