Joseph Wate'ae'pule (or Wate) was born on Small Malaita in about 1854 and became the first Christian teacher on Malaita. In 1866, Bishop Patteson (q.v.) took Wate and Watehou from their village on Small Malaita, along with Sapibuana (q.v.), to be educated in New Zealand. There Wate befriended Rev. Joseph Atkin, who became his godfather. He was able to return briefly to his village in 1870, during which time he also visited relatives on Ulawa. Wate was on board the Southern Cross when Patteson was killed in 1871 and was one of the volunteers who went with Atkin to retrieve the body. In 1877, he and his wife Lydia were returned to Small Malaita to begin Malaita's first Christian mission. His wife left him in 1879 and subsequently died. Wate then took a non-Christian wife, Waikeni, and for this he was placed under discipline and forbidden from operating the school. In 1881, Dr Codrington (q.v.) paid Wate a short visit, but there was no further contact from the Mission until 1883 when Wate visited Ulawa. In 1884, he was restored to Christianity by Rev. Richard Comins (q.v.) and opened the school again, but it was cursed by Dorawewe, a local leader, and lasted only two years. Wate returned to Norfolk Island and then moved to the mission's base on Ulawa until the 1890 death of Dorawewe, who in his last days had ordered Wate to return. We know he did travel back to Malaita during this time since he accompanied HMS Raven to Maana'oba Island in 1889 to investigate labour trade disturbances. Wate was noted as speaking very little English at that time. (Capt. G. W. Hand, HMS Royalist to Commander-in-Chief, Royal Navy Australia Station, 6 July 1889, Australia Station, New Guinea and Solomon Islands, 1889, 6)

After Wate returned to Sa'a, further trouble came in 1893 when a party of Malaita men from Laloisu'u killed Ugi trader Fred Howard. Britain sent a naval ship to punish the murderers and after Andrew Dora and Stephen Tara from the Sa'a mission gave it assistance the school was attacked. For several years, ramo assassins targeted Wate, seeking to collect a bounty posted for his death. The first baptisms at Aulu, next to Sa'a, were held in 1893. Wate left for Norfolk Island in 1896 and was ordained a deacon on 27 August 1897. By that time in Small Malaita, eight schools had been established, forty-nine people had been baptised and there was a congregation of three hundred. In 1902, Wate returned to Norfolk Island for medical treatment of a cancer in his jaw, and to train for the priesthood. Two years later he returned home to die, and was buried at Aulu. (Fox 1958, 167-168; Montgomery 1904 [1996], ch. 17; SCL, Oct. 1897, 4-5, Feb. 1898, 9-10; 'Solomon Island Sketches-Introductory', SCL 14 May 1898, 7, Apr. 1905, 20; Ivens 1905) 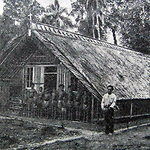