Coastwatchers were prewar planters, officials, and missionaries, mainly from Australia and New Zealand, and Solomon Islanders, who went into hiding after the Japanese invasion in 1942 and formed a secret communication system to monitor enemy shipping and planes for the Allies. They also rescued Allied personnel who were stranded. There were around a hundred coastwatchers in the South Pacific. Many were stationed in Papua New Guinea and twenty-four in the Solomon Islands, including two in Bougainville. Their activities were crucial to alerting the Allied forces of approaching Japanese bombing raids. The coded coastwatcher call sign was FERDINAND, after a fictional bull that preferred smelling flowers to the arena, to drive home the point that they were there to observe, not to take defensive or offensive action.

Officially, they were members of the Coast Watch Organisation, Combined Field Intelligence Service or Section 'C' of the Allied Intelligence Bureau. They began as part of the Royal Australian Navy through the Naval Intelligence Division, Navy Office, Melbourne, under Lieutenant-Commander R.B.M. Long. Many of the coastwatchers were commissioned as officers of the Royal Australian Navy Volunteer Reserve, which status was intended to protect them if captured from being regarded as civilian spies. The long-term head of the coastwatchers was Lieutenant-Commander Eric Feldt, based first in Port Moresby, Papua, as Staff Officer (Intelligence) and then in Townsville, Australia. The Coastwatchers remained under the command of Australian Naval Intelligence rather than the South West Pacific Area Command of U.S. General Douglas MacArthur. One of the best-known coastwatchers was Donald Gilbert Kennedy, a New Zealand District Officer who was given a roving command over Nggela, Isabel, Russell Islands, New Georgia and the Shortland Islands. His was tasked with trying to ensure that indentured labourers were returned home, to try to persuade village Headmen to carry out their administrative tasks and, as an officer of the Solomon Islands Defence Force, to set up coastwatching operations in his region. Much of his travel was aboard the Wai-ai, a thirty-six-metre racing gaff sloop owned by the Protectorate Government. He was joined by two mixed-race Solomon Islanders, Geoffrey Kuper from Santa Ana, who had trained at Fiji Medical School before the war (and his wife), and William (Bill) Bennett (q.v.) from New Georgia. Kennedy put together a small 'army' of Solomon Islanders who fought against the Japanese and provided valuable information to the Allies. (Boutilier 1990; Fowler 1959, 239; Butcher 2012, 53-76)

One of the most famous coastwatcher incidents concerned a future President of the United States. In August 1943, Sub-Lieutenant Arthur R. Evans, an Australian coastwatcher, and his group in the Western Solomons rescued the survivors from a small American vessel, PT-109, which had been rammed by a Japanese cruiser, one of whom was John F. Kennedy.

The Solomons' coastwatchers operated as a team, with Jack Read and Paul Mason on Bougainville totally integrated with their BSIP colleagues. They reported through Feldt in Townsville until the Americans retook Guadalcanal, after which messages were passed to Lieutenant-Commander Hugh Mackenzie, Royal Australia Navy, and Deputy Supervising Intelligence Officer, based near Henderson Airfield on Guadalcanal. (Feuer 1992, 65) A memorial to the scouts and coastwatchers was unveiled in Honiara in August 2011. 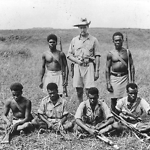 Title
Coastwatcher W.F.M. Clements and six BSIP Scouts on Guadalcanal, 1942. On the right of Martin Clements is Daniel Pule and on his left is Corporal Langabaea who later became a Sergeant on Malaita.
Type
Image
Date
1942
Source
SIG